About the Friends History

The association of the Friends of Coventry Cathedral was launched at the summer Coventry Diocesan Conference on 8th May 1934.

The founding steps were taken by Provost Howard who had been inspired by the earlier founding and success of Canterbury Cathedral Friends.

Provost Howard gathered together members of the Cathedral congregation who all appreciated that whilst the Parish Church of St Michael had been one of the largest and most beautiful parish churches in the country, it now needed a good deal of costly work to be undertaken in order to make it fully worthy of its status as a cathedral.

History had been kind to the supporters of St Michael’s Church. In 1869 George Gilbert Scott, the leading architect of that period, had reported the whole church to be in a condition of lamentable decay. In the 1880s the sum of £40,000 was collected for the restoration of the nave and for the complete re-facing of the tower – a work executed so thoroughly that for many years following there was little need for great annual expenditure on repairs.

"To bind together all those who love Coventry Cathedral,

to bring others to appreciate and enjoy it,

to preserve it for posterity

with its beauties unimpaired and enriched"

– these were the declared objects of those first members of the Friends. The Friends Association grew rapidly and within a year there were some 400 members drawn from across the diocese.

The years that followed can be conveniently divided into three periods. 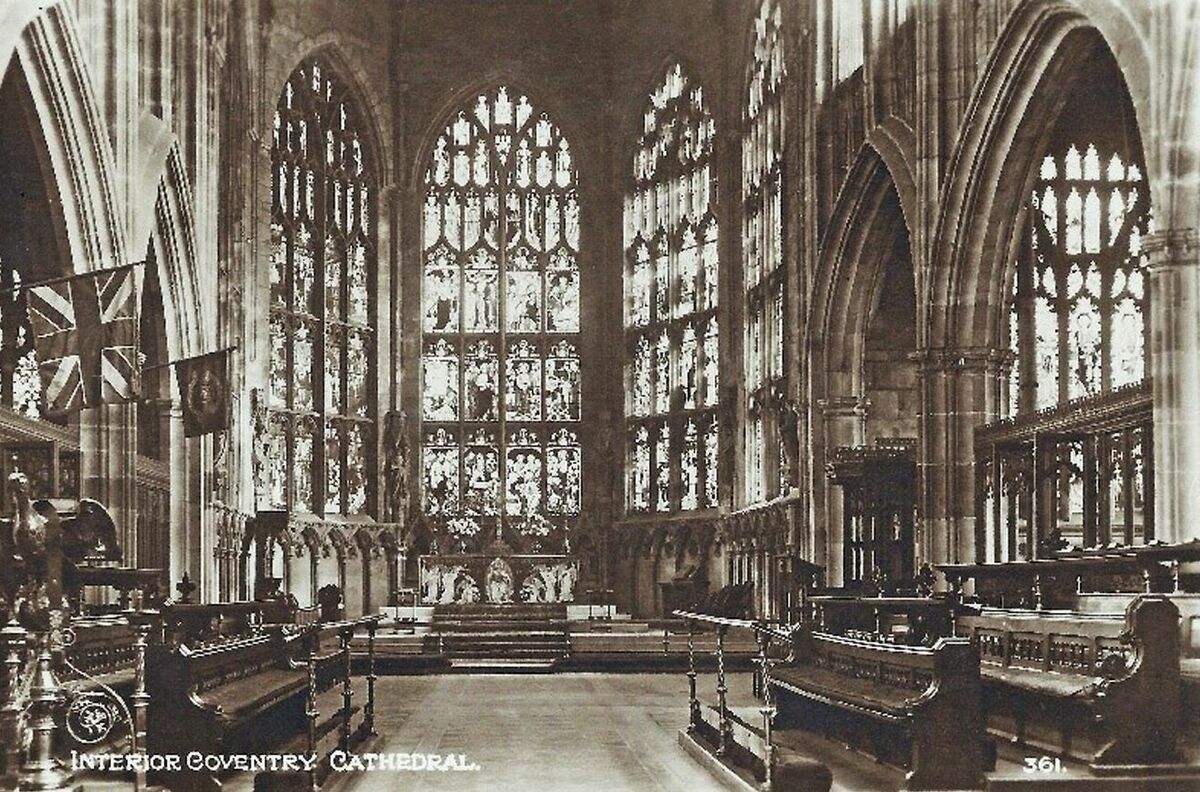 During its first six years the Friends carried out two main groups of work. 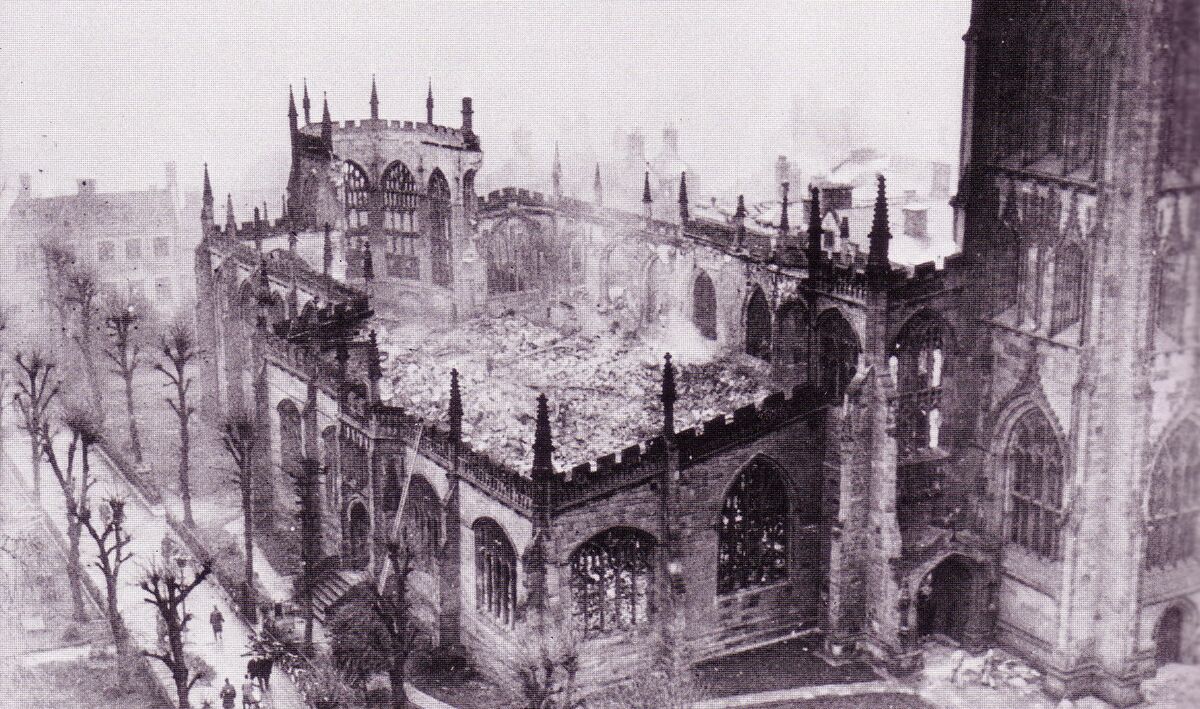 "Coventry Cathedral was engraved by fire into the history of the world on the night of November the fourteenth in the year of our Lord nineteen hundred and forty. The bitter agony of all Friends of the Cathedral is too sacred to record."

These were the opening words of the first Friends’ newsletter following the destruction.

Under the circumstances there was little the Friends could do for their ruined Cathedral, but what could be done, they did. At their expense the south porch was established as the Chapel of the Resurrection (now named the Bishop Haigh Memorial Chapel) for private prayer and daily services.

But the greatest work undertaken by the Friends was to keep alight and continually fan into flame the hope of rebuilding the Cathedral after the war.

One month after the final declaration of victory, a Pageant was staged in the Cathedral Ruins by the Friends and it was seen by over 5,000 people on three September nights.

Episodes in the history of St Michael’s Church were presented by local amateur dramatic societies on a great stage built right across the ruined east end. It was produced by Tom Harrison, Regional Officer of the Council for the Encouragement of Music and the Arts.

The Coventry Cathedral Reconstruction Committee became the active body responsible for everything to do with the Cathedral rebuilding. The Friends gathered together their funds in order to make a substantial contribution to a particular part of Basil Spence’s new building, and in time the Friends provided the furnishings in the Lady Chapel.

While the new building was being constructed the Friends funded the cost of the boards that announced the Hallowing Places in the Ruins. They also provided for the Provost a new cope designed and made by the Royal School of Needlework.

On the 25th May 1962 the new Cathedral Church of St Michael, Coventry was consecrated by Bishop Cuthbert Bardsley in the presence of Her Majesty Queen Elizabeth II.

The work of the Friends in support of the Cathedral’s ministry and buildings continues to date. 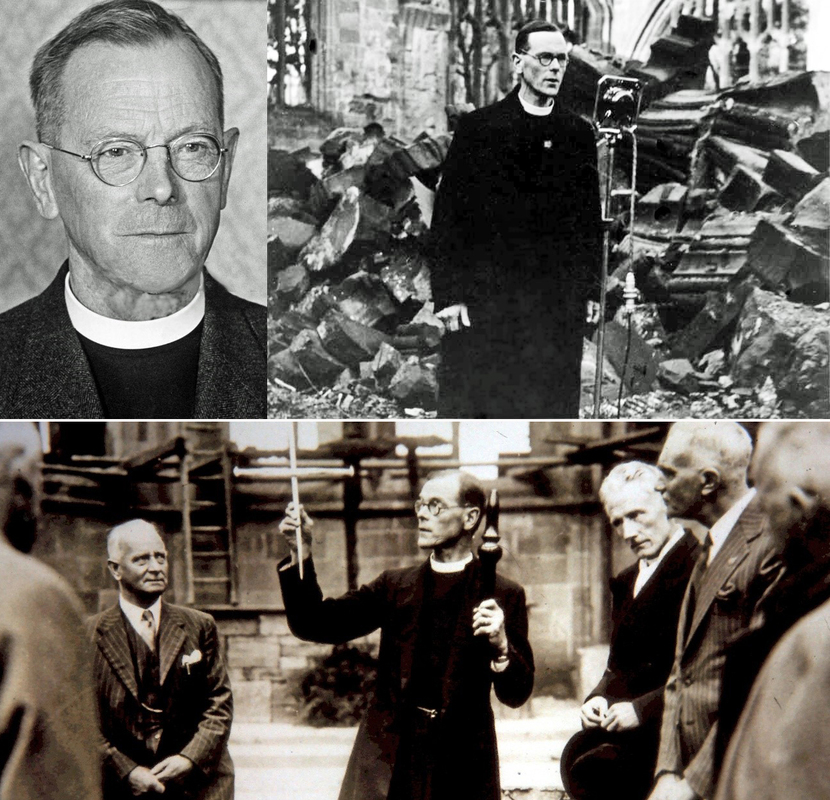 Richard Thomas Howard was Provost of Coventry and served Coventry Cathedral from 1933 to 1958. He was one of the four Cathedral firefighters on duty that night in 1940 when the Cathedral was bombed. Six weeks later in the BBC Christmas Day radio broadcast from the Cathedral ruins his address included the following words that were the foundation of the Cathedral’s ministry of reconciliation that continues to this day:

"What we want to tell the world is this: that with Christ born again in our hearts today, we are trying, hard as it may be, to banish all thoughts of revenge; we are bracing ourselves to finish the tremendous job of saving the world from tyranny and cruelty; we are going to try to make a kinder, simpler — a more Christ-like sort of world in the days beyond this strife."

Provost Howard’s ashes lie in the Cathedral Ruins alongside the altar that is built of stones that fell during the Coventry Blitz when the roof collapsed.