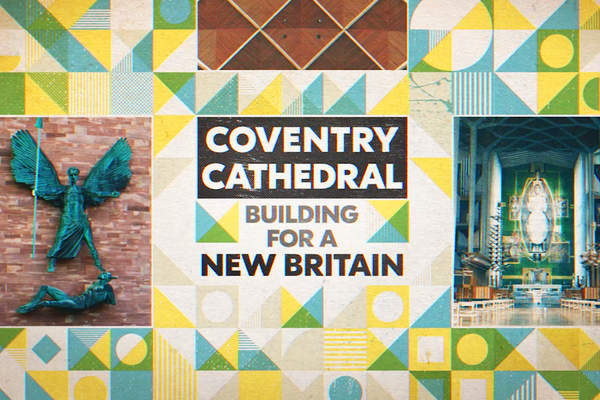 BBC Documentary on Coventry uses material obtained by the Friends

THE BBC FOUR documentary film about the construction of Coventry Cathedral was greeted with critical acclaim.   The Friends were able to help the film's producer by facilitating access to archive film footage first digitised by the Friends.  The impact of the BBC film was reflected immediately in a marked increase in visitor numbers to the Cathedral the very next day.   Whether interested in the Cathedral or not, it is well worth viewing.

The documentary film gathered footage from a selection of archive films to create a fast-moving story of the creation of our Cathedral building and the post-war recovery of our city.   It included reflections by people who were there at the time.   If you missed the first showing or if you want to view it again, the documentary is now available online using BBC iPlayer.

Friends Archive Film.   The Friends have digitised the silent 16mm film shot by Barnard Reyner, the Coventry architect.   The Friends have done this to preserve the footage for posterity, and also with the hope of adding a commentary soundtrack in time to show to members in 2022 in celebration of the Diamond Jubilee of the Consecration.

John Wyver, the producer, wrote about the Reyner film, “The technical quality of his footage is strong, and he unquestionably had an “eye” for a striking image, almost certainly informed by his own practice as an architect…..We are thrilled to show historic sequences for the first time in 50 years.”

Professor Helen Wheatley, Director of the Centre for Television Histories at the University of Warwick, was a consultant in the production of the documentary.  She commented

“I’m particularly delighted that the wonderful colour cinematography of Barnard Reyner, a local architect and filmmaker who was commissioned to document the construction work, was brought to our attention thanks to one of the Ghost Town screenings.

The footage, which had been sitting in an attic until a family member who attended one of our events in December 2018 brought it to our attention, has been used to wonderful effect in John Wyver’s film to bring the story of the Cathedral’s building to life.

It has been a real pleasure to be part of this process and to see how new programming can be constructed from archival sources; John has been patient and generous in sharing his process with us. I can’t wait for the people of the city to see the finished result.